An internationally known dancer and choreographer, Arthur Hall founded the
Afro-American Dance Ensemble in Philadelphia (1958), as the artistic director for
thirty years, founding the Ile Ife Black Humanitarian Center on Germantown Avenue in 1968.
He has been a movement specialist for the National Endowment for the Arts and an
instructor of dance at Dartmouth College among scores of other schools and
universities. Renowned for his outstanding choreography, Arthur Hall's professional
interest in African and African-American dance has taken him around the world, sharing
dance with young and old alike.

Arthur Hall now [1996] resides in Camden, Maine, maintaining an active schedule of his
African Festivals in American Schools and communities.
Muntu Dance Theater of Chicago is working on a revival of his Fat Tuesday and all that Jazz (1977).
He is the artistic director of the nonprofit Ile Ife Films, the Arthur Hall Collection,
and is working toward establishing an international dance center in Rockland, Maine.
Arthur Hall is a member of the New England touring roster. 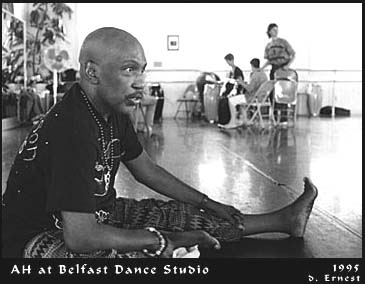